Drought leaves lives of families in Afghanistan hanging in the balance 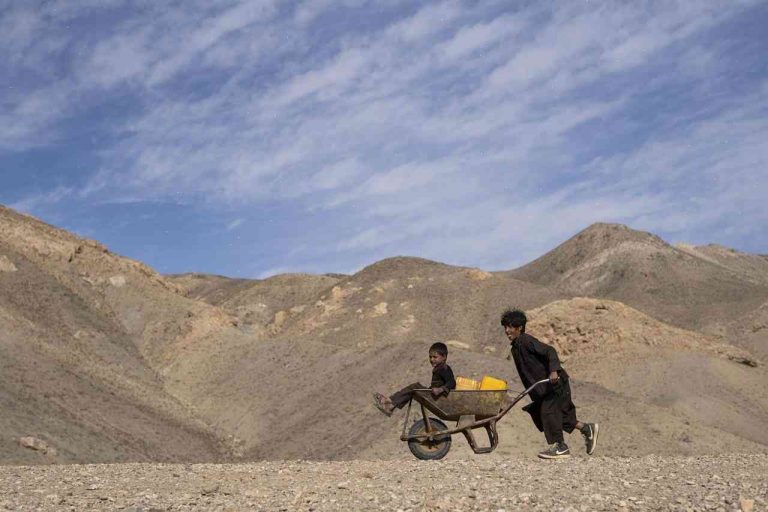 Hamidullah has sold several sheep and goats to supplement the family’s meagre income but still struggles to make ends meet for himself and his wife and five children.

A good harvest this year was cancelled by the worst drought in half a century in the village of Khudabab in Khost province, which has affected nearly all of Afghanistan’s 102,000 families in a country still heavily dependent on foreign aid and assistance after more than four decades of war.

Farmers are dependent on the rise of summer rainfall from the drying mud ditches that stretch for miles in Afghanistan’s winter-weary hinterlands.

But even a warm rainy season has failed to bring any – and so far, this year no spring rains have been predicted.

The drought is forcing villagers to abandon their fields to collect water at the small pond in the middle of the village. Water is still available in the spring and summer, but the women on guard keep up their vigil at the pond, waiting for water to run down to the village. Hamidullah’s water pump burns out.

“We can’t stay on our land. If there is no water, we have no room to roam. We have nowhere to go. There is no point in waiting for the rains; we can’t wait.”

Spring rains are planned for the coming months, but any rains would have to come soon for most families in Afghanistan.

Farmers say they have received one-third of their usual water and that the drought will last for a long time. Photograph: Arshad Ali/Reuters

With no water, their arable land is stunted, stunting their future.

Hamidullah, who asked for his surname to be withheld, and his family have sold his sheep but are forced to eat whatever they have and sell the rest of their livestock to cover some of their costs.

Food is the most immediate problem but when their cattle die, he cannot purchase the remaining fodder to sustain them. He said many families in the village have given up, giving up on feeding their animals and have sold them for goats and sheep to supplement their income.

Jan Ali, a community leader in Khudabab, said the dry weather for months on end has affected children’s health as they play in the dry soil while their parents try to look after their own livestock.

“Before this drought, children have been very sick with diseases like worms and diarrhoea, but now their situation is worse as the soil is so dry,” he said.

Most of the children in his village cannot even lift or care for their malnourished siblings, he said.

“With the lack of water, the prices of milk and meat have risen,” Ali said. “People have been suffering for many months and now what we are facing is a full-scale disaster.

“The spring and summer have failed, and there is nothing we can do but pray for rain.”

About half of all families in Afghanistan rely on livestock for their livelihood.

“Every day, I watch the children playing on the muddy, dusty ground and crying when they go out for drinking water,” Ali said. “Those who live without water at home or earn less than 10,000 afghanis (£106) a month are at grave risk of hunger.”

Only 13% of German citizens can vote in elections

Plenty to prove that cycling is a right | Letters