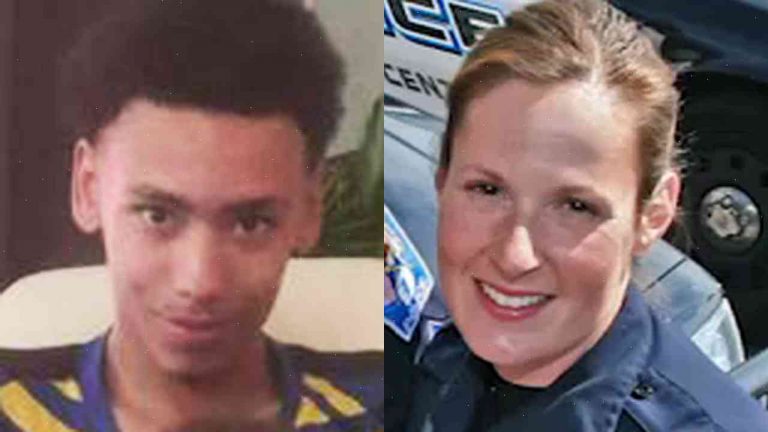 WASHINGTON — The mother of alleged gang banger Daunte Wright gave jurors a harrowing description of the basement where she believes her son committed murder two years ago — the scene of a “stampede” when police arrived, knocking her over.

Potter, 33, is charged with second-degree murder in the May 2011 death of her then-boyfriend, 25-year-old Debra Elliott, after a District of Columbia housing authority officer allegedly was ordered to beat him to death as he tried to get away.

Wright has not been charged in Elliott’s death. Wright’s attorneys said he had done drugs that day — specifically, marijuana and PCP — but none of it caused Elliott’s death.

“It was a stampede of people [when the police arrived],” Mary Lee Costantino, Wright’s mother, testified.

“Everybody’s hit and, wham, they’re all in a frenzy. It was a stampede,” she said. “You’ve seen them [police] surround a crowd. That happened.”

Police and other witnesses have said officers had to escort a handcuffed victim and a “blue wall of silence” of security personnel into the basement basement, where they were beaten to death. A Washington Metropolitan Police Department captain testified earlier this week that she suspects that Elliott’s refusal to stand still caused the brutal beating.

Prosecutor Ken Kratz contends that Potter demanded Wright beat Elliott because her 6-year-old daughter saw the confrontation between the woman and her boyfriend. Kratz alleges that Wright retaliated when she learned that the girl witnessed the incident.

Wright was wearing a knuckle sandwich-ring he had made to wear as a disguise when he was convicted of making a threat against District Metro Transit Police Officer David Estrada in 2011, Kratz said.

“He was carrying on a conversation with his mom that she wouldn’t know he was talking about her until afterwards,” Kratz said.

Estrada is testifying against Potter for the second time, after telling the jury in November that her mother brought him in to help beat the victims and make a statement.

Barnhart testified that Potter was holding Wright by the pants, and that the 26-year-old Wright said he would beat them up if anyone asked.

Wright denied him any beatings during the traffic stop in November, Barnhart said. Barnhart testified that he wanted to take both men to a hospital because he felt pain was coming from Wright’s legs, but he couldn’t find an ambulance. He picked them up at the home of Police Chief Cathy Lanier instead.

Wright made a plea deal last year, agreeing to take a five-year prison sentence and testify against Potter.