Holy See says pontiff used visit to Lesbos to reveal the plight of refugees and tell them: ‘We are your brothers’ Pope Francis faced criticism from conservative Catholic groups after a surprise stop on… 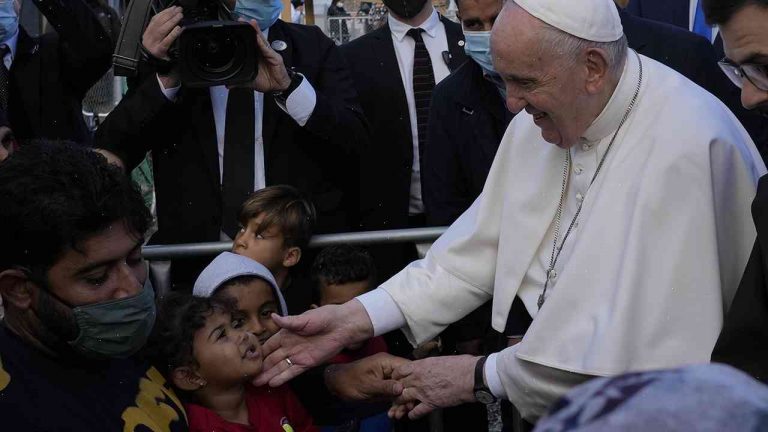 Holy See says pontiff used visit to Lesbos to reveal the plight of refugees and tell them: ‘We are your brothers’

Pope Francis faced criticism from conservative Catholic groups after a surprise stop on Thursday at a Greek refugee camp to comfort some of the thousands who fled war and violence in war-torn Syria.

The pontiff later held separate talks with Macedonia’s prime minister, Zoran Zaev, who agreed to move forward with relocating 400 refugees to Athens by the end of this month. Francis, returning to the Greek island of Lesbos from a four-day trip to Lebanon, spent three hours at the makeshift camp on Kos before flying to Malta.

During the visit, Francis spoke to some of the 5,000 refugees packed into the camp, hugging them, kissing them and shaking their hands. He ended his visit by praying and receiving a blessing from the children.

“The Italian faithful were a little apprehensive, but who are we to have doubts?” the Archbishop of Milan, Cardinal Paolo Odoardo Battiato, was quoted as saying by Il Messaggero, adding: “We would have watched the crowd in silence if it had been in the presence of the Holy Father.”

The pope’s trip to the migrant crisis-ridden island comes as European Union leaders gear up for a summit next week in Brussels that has been overshadowed by concerns that Germany’s Angela Merkel is heading for a political crisis over her acceptance of more than a million asylum seekers since 2015.

The Pontiff, dressed in a white cassock, offered little explanation for the surprise stop at the camp, telling reporters before his departure that the visit was “just about” helping the refugees.

Homeless migrants watch as Pope Francis blesses a group of them during his trip to the Demevetiki refugee camp on the island of Kos on Thursday. Photograph: Jeff J Mitchell/Getty Images

But many on the right have expressed outrage at Francis’s almost unorthodox attitude towards migration.

Last month, dozens of Austrian Roman Catholic bishops, led by the archbishop of Innsbruck, called on the Pope to avoid the “injustice” of welcoming migrants.

Austria has faced criticism for its migrant crisis after it said it would limit the number of Syrians it would host under an EU plan to relocate 120,000 asylum seekers already in the EU.

The US archbishop of Washington, Donald Wuerl, said the pontiff’s visit to Kos “gives us a bit of an identity problem”.

“Pope Francis came here to a part of Europe that has been victims of (migrant) arrival because of the way refugees enter the country,” he said.

“Certainly, there’s been conflict, there’s been war, yes, and by virtue of their physical existence, the Syrians – they bring with them a burden, there’s no question about that.”

He said Vatican emissaries had provided assistance to the refugees. “From our point of view, we recognise them as people who bear a particular burden because of the tragic conditions of their lives,” he said.

The pope faced anger from German conservatives, particularly the chief whip of the Bavarian Christian Social Union, the sister party of Merkel’s Christian Democrats, over his planned visit to Greece’s largest refugee camp in Idomeni on Wednesday, shortly before his departure.

German politicians said the visit would remind people of Merkel’s open-door refugee policy and undermine her efforts to end the war in Syria and tame the influx of refugees.