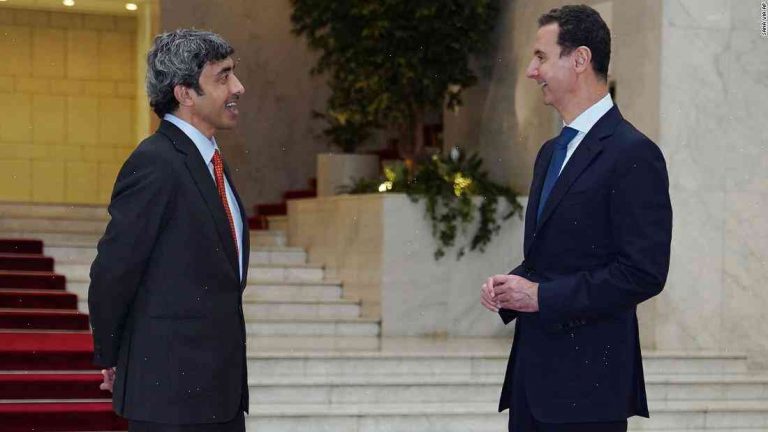 The foreign minister of the United Arab Emirates visited Syria for the first time on Saturday to present a symbolic “decoration of goodwill” to the country’s president, Bashar al-Assad, for the UAE’s role in maintaining a “security council” in Syria.

During the visit, Sheikh Abdullah bin Zayed al-Nahayan met Assad in Damascus. Speaking afterwards, he said he had appreciated Assad’s contribution to help ensure peace in the Middle East.

“The president of Syria is of great wisdom in finding solutions that help the Arab world and world and I also appreciated the president’s contribution to what can be called the security council, to maintain security in the region,” he said.

The minister also presented Assad with a “decoration of goodwill” that he said the UAE is known for in honouring those who maintain peace and stability in the region. “We think that this is in line with our principles,” he said.

The UAE, a close ally of the US and Saudi Arabia, has been one of Assad’s staunchest backers among the Gulf Arab states in the war on Islamic State and, more recently, the fight against the rebels seeking to unseat Assad.

The UAE has not been fully involved in the recent bombings in Syria and has expressed concern about the escalation between the Syrian government and its enemies, saying the fighting risks spreading to other areas in the region.

The meeting with Assad comes a day after Qatar’s foreign minister, Sheikh Mohammed bin Abdulrahman al-Thani, was also in Damascus to discuss the Syria crisis with Assad.

His visit raised eyebrows within the Gulf over the UAE hosting a guest of honour from the Assad regime which is opposed by many Arab countries.